Last weekend the Royal Albert Hall hosted the Festival of Remembrance which was attended by HM The Queen and HRH The Duke of Edinburgh, to honour those who fought and died in conflict. Beforehand a ceremony was held as the hall’s South Steps were renamed The Queen Elizabeth II Diamond Jubilee Steps. I was commissioned to carve the inscription to mark the occasion, which consisted of 6 pieces of stone, individually carved in the workshop before being placed in situ.

The inscription had to be very carefully planned to avoid any joins in the pieces of stone, and the laying of the stones themselves was extremely challenging, to ensure that the inscription reads perfectly. The Royal Albert Hall was blessed with a clear evening, and the steps were lit from one side to highlight the v-cut in the inscription, which was clearly visible.

I was fortunate to be invited to attend the ceremony and see the Queen from close quarters as she inspected the inscription! Afterwards my wife and I were also invited to attend the Festival of Remembrance later in the evening, which was an incredibly moving experience. Read full news article here 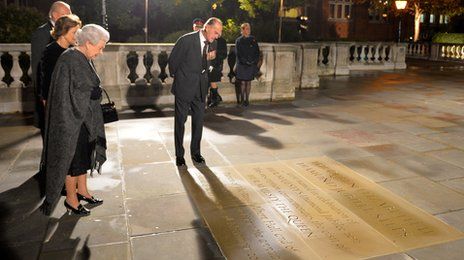