On the 9th September 2016 Hannah went to London's Porchester Hall for the annual Good Funeral Award's gala lunch. She will thrilled to collect an award for "Best Maker of Hand Carved Memorial's in and Indigenous Material" on behalf of the workshop. The event featured in several newspapers and The Independent made a special mention of Stoneletters:

Awards that piqued my interest and their winners: Embalmer of the Year (Andy Holder), Coffin Supplier of the Year (sponsored by Ecoffins) (Musgrove Willows), Best Internet Bereavement Resource (Muchloved), Gravedigger of the Year (which gets the biggest cheer of the day) (David Homer of D. T. H. Burial & Churchyard Services), Best Maker of Hand Carved Memorials in an Indigenous Material (Stoneletters).

Read the full article about the award ceremony here. 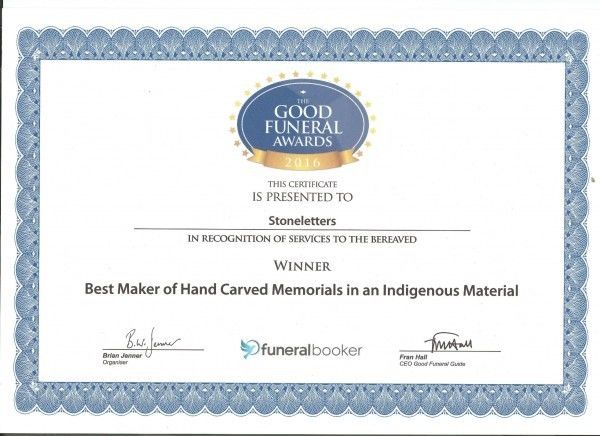